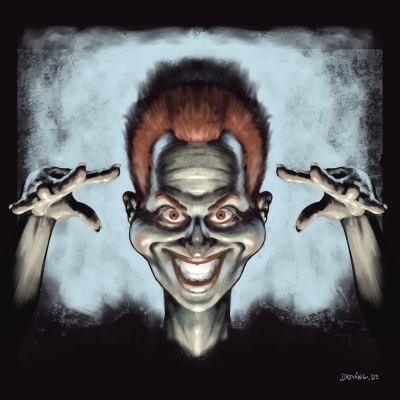 You are very, very sleepy … Stop! Wait until you’re done reading before entering a deeper trance! I found some interesting parallels regarding hypnosis, storytelling and creativity I’d like to tell you about.

I started reading about hypnosis, after a blog post by Scott Adams claiming that Trump is “a master wizard”. I.e. somebody who is able to persuade people without the need for reason or valid arguments (my words). Adams, being trained in hypnotic techniques himself, says Trump uses a lot of methods that allow him to “talk directly to the unconscious” of the audience. Adams even published a book list about the persuasion topic.
Wizard or no wizard, hypnosis is certainly a fascinating topic. And it has a lot of implications for storytelling and the creative process. Not neglecting Adams list, I started to read some German books first. If you want to read up on this you’ll find some very useful information in “Über Träume, Trance und Kreativität” by Gerhard Schütz and “Die Kunst der Hypnose” by Werner Eberwein and Gerhard Schütz, too.

The authors of the mentioned books are working with the newer hypnotic methods by Erickson, who reintroduced hypnosis into psycho therapy. His approach is more indirect than the traditional methods.

How is that connected to Creativity?

The first obvious parallel is, that you don’t want to be disturbed in a hypnotic session or a creative process. In a famous lecture about creativity given by John Cleese, he advises to create a space and time within which you will not be disturbed by anything. Similar Steven King in his Book “On Writing” – he created a “far seeing space” for himself, serving the same purpose.
And if you’ve ever participated in a brainstorming session, you’ll know that one of the most important rules is to avoid criticism and judgement. With hypnotic therapy the hypnotised person is also brought into a “positive” state, via asking questions that are easily answerable with “yes”. Maybe this priming effect could also be used to heighten the creative output .. seems to be worth a try.

Another parallel is the induction of the trance. Erickson found that it helps to create a state of confusion in the patient, from which he glides easier into trance:

This doesn’t map exactly to humour, but the effect is similar: if you’re in a joking, playful mode you are opening up to new possibilities. At least that’s what I experienced.

Here we’re seeing a lot of parallels at the receiving end – the audience of a movie, for example. I could err, but I think it was Robert McKee who called a visit to the cinema “the ritual”. And rightly so. One of the trance inducing techniques I found in the literature was to tell a story, within which one of the characters told another story, which contained another story, etc. Sounds familiar? I don’t know about you, but my first association was “Inception” when I read about this. The reason this works is, that the consciousness quits after a certain number of “story layers” and leaves the field to the unconscious. And that’s who (or what?) we want to talk to.
Btw.: have you ever heard about a writing advise, that you shouldn’t use negations? Guess what – the unconscious doesn’t do too well processing negatively formulated suggestions. With that in mind it’s worth looking at Trump using negations, I think.

Another thing the unconscious goes for are parables and implications. The Erickson method uses them to place suggestions in the patient. Since the unconscious of the patient creates the connection itself, it more effectively “sticks” with it. (Btw.:There is another parallel in self-assigning tasks vs. being told what to do).